on Saturday the 7th of April i went to see Harry Styles, and let me just explain things a lil bit..

whenever i have to go on trains or be somewhere i'll wake up like 6 hours early, i'll have at least 10 alarms set for 5 am and i'll spend the first half hour thinking of the worst possible scenario and get myself into a panic.
i'll have a shower, but during that shower i'll have an anxiety attack and cry then get out and act like nothing happened then i'll start to get ready and whatnot.

the thing about mental illness though, is that is doesn't just go away.
no matter how excited/happy you should be, you're still thinking of the worst possible outcome, you're still feeling all the physical symptoms of anxiety, needing to nervous pee, 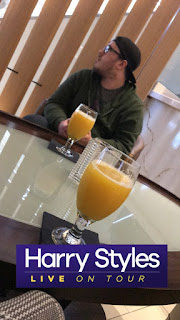 eventually after all like decades of walking, we made it to the hotel which was swanky as hell!!!
and after i'd done my make up again, we were ready to go eat and then see Harry Styles!
we couldn't eat because the queues were ridiculously long and the waiting times were crazy so we would have missed the concert so we went to the hotel bar instead..
in the moment, i weren't this anxious depressed ridden woman, i wasn't this woman that struggled with shit.
we were just the happiest people in the world and we were waiting to see my favourite artist, the person who's music i play 24/7 which he sings along with me and the majority of the time he doesn't complain.

oh, we drank rum cocktails and i felt AMAZING.

by the time we got to the arena, i was incredibly panicky, my heart kept racing and i felt like i was gonna puke all over myself (thankfully, i didn't) but anyway, we found our seats and we were crazy close to the stage and i couldn't believe i was gonna see him IN THE FLESH finally!!!!!
after all the build up from my birthday, it was finally here and in no way shape or form was i going to let anxiety or depression ruin this for me.
i was not prepared to let it be ruined over that.

he was finally out here, in the flesh.
he was right in front of my eyes and i couldn't believe it, after so long of looking through instagram videos/pictures, after scrolling through his fan pages for months and months, he was here.
and it was me that was finally taking pictures and videos of him.
i had this lump in my throat, i wanted to cry.. 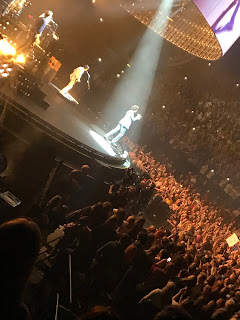 i was in an arena that held 15,683 and every single seat was taken. for a woman that often panics about leaving my house this was an achievement.

i couldn't stop shaking, in that exact moment i felt free.
free from everything that's made me feel like a burden to the people around me.
i feel happiness but not the happiness that goes away as quick as a click of a finger, but the happiness that's stayed and even now it being a memory it still makes me incredibly happy.

although the day after and just laying down on the bed, i felt mentally exhausted. i was so drained after being so anxious, after having barely any sleep, i just wanted to not be so tense.
i'd had a bad belly after my stomach being in knots for days, and i still couldn't actually relax.

the thing about mental illness is when you feel like you're at the bottom of the barrel, you feel hopeless, like you've got absolutely nothing going for you.
you feel like you're this fragile delicate little thing that people just give pity, you have your defenses sky high no matter what. 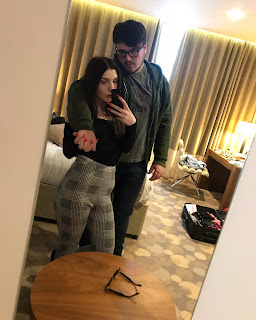 no matter how low and how truly awful you feel, you've all got alot more going for you than any of you realise.

and lastly, never underestimate yourself.