Before anyone tries to say anything about this post, I'd just like to say I'm not in any way whatsoever condoning the actions of this man, and in no way am I giving the excuse of being mentally ill for this either.
Whether you're mentally ill or not anybody is capable of things as horrific as these.

WHAT DOES ANYBODY ACTUALLY KNOW ABOUT RAOUL MOAT?

His mother who has a history of mental illness took a lot of things out on him, she burnt all of his toys in front of him, beat and abused him which over time all these feelings of rage, resentment and just pure anger built up over time. He'd bottled up all of these emotions throughout his life and he was just a volcano waiting to erupt..

Let's skip into his adult life now, he's an angry volatile person to be around, he works as a doorman and he had several kids (don't quote me on the number lmao) and he's just been put into prison serving an 18 week sentence.
Whilst in prison his girlfriend of 6 years contacts him and ends the volatile relationship.
She also lets him know she's got a new man and he's a police officer..

By this time, he'd already believed the police were out to get him so her saying that added fuel to the already lit fire which was Raoul. Even before he got put into prison he grew increasingly paranoid and had CCTV cameras put all over his property to ''prove'' the police were hassling him, there's also recordings of him saying he could prove that he never assaulted his ex girlfriend but since he's deceased there's really no way of finding proper ''proof''.
This is still before he got put into prison, his paranoia was overtaking him. He truly believed people were out to get him so he'd sleep with an axe and a crossbow under his bed.

And that really tells you where his mindset is at..

Whilst in prison he had several meetings with social workers which he'd repeatedly told them he'd like to speak to a psychiatrist regularly just in case something is actually wrong with him.
In his own words..
''I'm quite emotionally unstable you know, I get myself over the top happy sometimes, and I have my bad days you know.''

He begged to get help and his pleas fell on deaf ears. He's extremely desperate to get some kind of help so he doesn't end up losing his children.

As an adult he grew to have nightmares, and in these nightmares he was a seven year old boy being chased by monsters.
He grew up plagued by bad dreams and memories of what was his childhood, from early on he bottled up the negative feelings like rejection, rage, anger, etc.
It appears that during his prison stay his mental health was slowly deteriorating more and more.
Every time you ask for help, and just get pushed away. It makes you feel more and more defeated and that would have only added to the frustration which again he bottled up all of his emotions as a child and that being his coping mechanism.

''The more you block things out, the more numb you become in the heart, you know. You get to a point where happiness to you is just like, neither here nor there.''

36 hours after he got released he was seen on CCTV  buying camping equipment which shows whatever plan or idea he had in his head he was ready to go through with it.
He was also seen on his OWN CCTV cameras on his property with the sewn off shotgun he purchased.

So, it's clear where his head is at.
He's out of prison. He's feeling like he's lost everything. He blames his ex girlfriends new partner who he believes is on the police force and he's ready to get revenge.

He's shot his ex girlfriend twice and thankfully she survived, he then went on to shoot Christopher Brown three times and unfortunately he didn't survive.

This became Britain's LONGEST manhunt.
Several arrests were made in connection to his whereabouts but somehow he was always one step ahead of the police until they found him in Rothbury.
After 5 hours of him building a rapport with a skilled negotiator something switched up and he finally said..
''It ends in this field tonight.'' 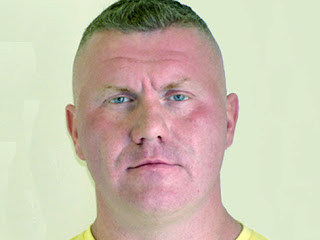 The police had also tasered him but he'd put the gun to his head and shot himself, he got rushed to a Newcastle hospital and then later died.

I personally believe everyone got let down here.
I'm not making ANY excuse for him for doing what he did but in a way I believe there's a possibility it could have been prevented had he been given some kind of help.
I also believe that had he been taught to deal with his emotions differently by that help provided, people wouldn't have lost their lives because of his actions.
I think it's a really sad and disappointing situation because on the recordings which you can find on YouTube etc, you can hear how desperate he is and his own brother said in an interview on the documentary Real Crime did that he was on the verge of having a very severe breakdown.

being mentally ill is draining.
having both anxiety and depression is like two sides constantly in war with eachother, you've got the anxious side of me that would love nothing more than to go out, make more friends etc and then you've got the depressive side of me that would rather take depression naps like 5 times a day, stay up til at least 4am and then sometimes have a lil cry before I sleep then do it all over again the next day..

for a little while now i've had literally no idea of what to write about, i've had no motivation to even write but then i figured why not write about something i'm feeling more frequently so here it is..

i'm not sure why i've suddenly been feeling like this, i just feel really fucking sad.

i have 5746485929 things going round my head all at once and all i'm doing is overthinking every single little detail. i'll be laid in bed thinking of something that happened literally months ago and i'll get upset and it's a constant cycle of this. 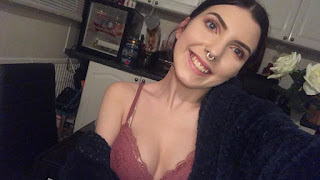 i'm a creature of habit, so when something has changed it completely knocks me and i won't know how to function the same. even if it's the tiniest change, it kinda just knocks a chink off my armor and i'll feel really lost.
lost and lonely. the two most prominent feelings lately.

i tend to keep everything in but my mam always said i'm like a sponge and there's only so much i can take until i explode and just end up crying my eyes out lmao.
which also doesn't happen often but when it does, it's like i'm broken and i don't wanna feel broken anymore.

i just don't know what to do anymore, and i get frustrated because i have no reason to feel like this but i do and it freaking sucks.