Right now my minds full of thoughts of everything.

Hey guys, it's currently 6am. I can't sleep and I'm thinking of everything so I'd like to just unravel my thoughts on this post..

For years I struggled with anorexia. Just that word makes people uncomfortable, but me? It makes m proud. Proud because after years of struggling so badly with it, I got better with the help of my mama and my entire family. I used to be so embarrassed of telling people why I suddenly just stopped going to school or why people never saw me anymore and that was the reason. I was constantly going to see doctors and going to counselling sessions. That's what my life became. Constantly getting weighed secretly hoping I'd never put weight on but it got to a certain point and I was getting worse and worse, and I decided I didn't want that for myself anymore. 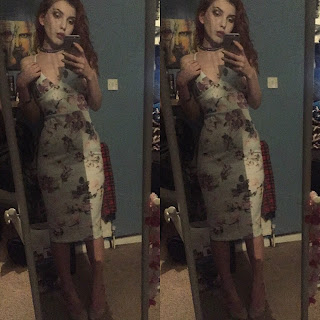 It's been a while that I've been in recovery for anorexia now and you know what? My eating still has its moments but I push myself and force myself into eating because I'm not that person that whenever I get stressed or have a bad day I suddenly want to stop eating because I'm so much stronger than that.
Having an eating disorder so severe didn't just affect me, it affected my entire family. Everyone became more protective of me and it brought everyone more closer. I sometimes forget how much of an impact it had on the people around me and I shouldn't.

Anxiety. Anxiety is something I've let control me for so long even after getting better with my eating disorder. It used to be so bad that I would literally cry at the thought of leaving my house, I used to make plans with people all the time and make some bullshit excuse at the last minute and I'd get so worried about just stepping out of my house that I'd get into such a state of panic. Right now though, my anxiety's slowly slowly SLOWLY getting to the point where I can go out, force myself to get up even on a bad day AND I can talk to new people.
I do have the best people around me right now, I literally going out now and sometimes I do zone out but alot of the time I'm smiling or just laughing because I never expected this in a million years so I feel like the luckiest girl in the entire world.


This blog is almost at 30 thousand readers too, and that's the craziest thing. I never believed anybody would be interested in anything I had to say yet so many people have continued to share and read my blog which makes me happier than you'll ever realise. I'm so so grateful to be able to do something I love every single day and it not get the least bit boring. I'm proud of how far this has come, I get so happy talking about what I do and all I ever want is to try and atleast make a difference and change the world basically. A small girl with big dreams.

ThankYOU all again for taking the time and effort out into reading something so personal and close to me which this blog is, I cannot thank you all enough because this is my reason for everything.