This post is going to be slightly different to my other posts but I hope you still enjoy it and yeah.

I personally feel like although I'm still super quiet, I have loads to say but what I've realised recently is that because I'm super quiet people can sometimes take that as in I don't like them when that isn't the case at all. 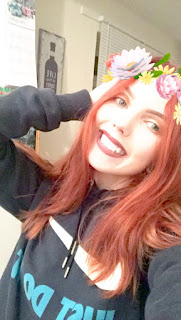 I either want to go out all the time or not at all, there's never an inbetween with me, I either eat loads or starve myself, it's all black and white with not a hint of grey showing.
Anxiety is something I speak alot about on this blog, it's something I struggle with alot.. don't get me wrong I am slowly feeling less anxious all the time but when I do it all hits me at once and when I'm having a kinda anxious day I don't wanna talk to anybody. I just wanna be by myself and just game til I start to feel better..

I don't want to date someone that has to change what they do just to make me feel at ease, you know? Like I just wouldn't wanna feel like a burden because my anxiety stopped me from doing alot of things in my last relationship and it caused so many arguments because I was petty as fuck.
Don't get me wrong, I can still be petty as fuck but for different reasons this time.

Some days I'd rather just spend hibernating under my duvet til I felt better and more like myself. When I do have my little anxious days I'll feel like I'm slowly slippin back into old liv and old liv had so many bad habits that she became a shell of herself and she had this idea of herself which wasn't really right but that's what she believed and she stopped eating and stopped being her fun self because she believed she wasn't great the way she was and that's not cool.

I want people to understand that when I am really distant and blunt it isn't like I'm doing it on purpose or anything, it's just how I'm feeling so please never take it personally.

I am NOT my anxiety, I am not this closed off person that I act like because of course I have feelings and I care but I have such a fucked up way of showing I care like alot of the time I feel so defeated with things.

Some would say I have a hard time dealing with commitment, however I'm not going to commit to something I don't believe in whether that's friendships, relationships, business - whatever.
When someone proves that they're genuine about me and that they're actually a really genuine person, that's when I'll put my all into something. Probably seems super harsh and everything but time after time I've been let down or left and I'm so over wasting my time.

Time is the one thing you can't ever take back so if you're spending the majority of your time on someone and then they fuck up well you can't take that shit back, time is precious so don't ever waste it.

Never give up on the things or people you love.