This post is going to be SUPER different, I'm insanely fascinated by British history which includes British gangsters, the ones I'm most interested in are the Kray twins.. Ronnie and Reggie Kray were two of the most notorious gangsters in England as well as the Richardsons etc. 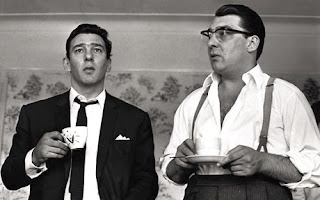 However, Ronnie Kray was most known for his mental illnesses - he's known as the 'crazy one'.

He was first labelled insane and then later got diagnosed as a paranoid schizophrenic at the age of 22 whilst in prison. A lot of people feared him because he was such an unpredictable person and nobody could ever tell what he was going to do next.
What I find particularly interesting though is he has an identical twin Reggie, so what made Ronnie so different compared to his own twin? Identical twins always have a 70% chance of either having bipolar disorder OR schizophrenia, non genetic factors play a huge role in the onset of these diseases.

''Scientists have found that it isn't only genetic variations that are important. The epigenetic differences may tell us more about the causes of schizophrenia and bipolar disorder, as some alterations were specific to either disease. Importantly, epigenetic processes are potentially reversible meaning that this research could open up new avenues for the development of novel therapeutic drugs.''

So, as well as him having schizophrenia he would take drugs which would inevitably make things so much worse. He was known to do Ecstasy which can also cause psychotic illnesses - so add that to his paranoid schizophrenia it most likely contributed to him committing crimes. Although he was always high as fuck on drugs and living with this unpredictable disease he still kept his morals of not hurting children and women which is pretty interesting because you'd think he wouldn't give a damn, yet he was such a well feared man yet still so well respected whether it's for the wrong reasons, it's upto you all to decide.

However, I think he's one of the most fascinating people on this planet. I've always been so interested about gangsters and serial killers because really they're just ordinary people yet they can do some of the most heinous crimes - this will be a new little chapter on my blog for a little bit just to see how you all respond an if you like it or not and if not I'll come up with some other ideas but for now I hope you all enjoyed it and yeah hit em up with ideas.