It's currently half 3 in the morning, I've been tossing and turning for hours til I've just given up on the idea of sleeping for now anyway, I feel like I just have to get stuff off my chest so I'm sorry if half of this makes no sense whatsoever.

I have absolutely no motivation to do anything, for the past couple of days I literally haven't given a fuck - I hadn't been wearing make up so I went from doing my hair and make up every single day to just choosing to be in oversized tee's.

Last night I had possibly the worst nightmare I've had so far, and I'm gonna share it with you all..

So, I'm not sure who's house this was at or anything but I'd kept getting messages and calls from an unknown number, I wake up one day and I'm surrounded by needles.. kinda like that scene outta saw but there were so fucking many needles and for some reason I was barefoot and I was so scared of them touching me or actually getting into my blood.. I saw a man with this mask on but it looked so realistic and I was trying to fight my way outta this but at one point before I woke up I just gave up.
My phone eventually woke me up but I was so petrified.

I know I have so many people around me that love and care for me and I speak to alot of people that genuinely care for me but I'm so fucking lost, I'm so privileged to be able to blog and do what I love but I'm so fucking lonely man.
I've been thinking about my future and what I actually want to come from it, I spoke to someone about what I wanted for my future, I told someone my biggest regret, it's funny because in the long haul it probably woulda been really bad but in the moment it'd have been really fucking awesome.

I feel like such a fucking wetwipe right now, I keep so so much bullshit in so nobody else has to worry or think about my problems and then on nights like this it'll all just come out and hit me like a ton of bricks. I hate feeling this vulnerable yet I hate feeling this constant numbness that has become a daily feeling now. 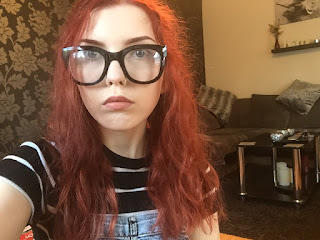 I feel like I'm genuinely broken, I put on such a facade that the people I do talk too won't even notice and I'm grateful to myself because when someones asks 'how're you feeling? had a good day?' them type of questions, how am I supposed to respond? Do I say that I feel like absolute fucking shit and the days are just getting worse and it's becoming more of a struggle now? WHAT THE F DO I SAY?

I have this guy on snapchat and he said he'd like to see more of my smile because he liked it but I can't constantly fake these smiles like honestly, if any picture looked anything remotely to how I feel it's gotta be this one. I feel this constant sadness that I doubt anyone could ever understand.

I miss my bestfriend, that's getting notably worse too. It's like everyday it just gets worse and more and more of myself is missing. I'm like a jigsaw but none of the pieces fit together and it's all jumbled together but you still try an make it work. That's an accurate description of me.