This isn't Olivia right now, it's her boyfriend Rhys

As you saw in her last post, she's taking some time away from here, and she doesn't know I'm going to be writing this, I wanna surprise her, like a romance ninja

I want all you readers out there, to share the shit out of every post that has been written on this blog. I want her to come back to 4000 views guys, +1 it, share it, post it on twitter, Facebook, Snapchat, put it on your cats collar and send that cat out, tell your Nan and Mum about it, just get the word out.

Me and Liv, we have been together over a year now and do you guys wanna know something? The amount of change I've seen in her over the year is astronomical. When we met for the first time she was this cute, shy little thing, who would listen to me natter on and on about all this shit that she didn't care about, and now thinking about it, I don't know why I did care about it, it was a big old pile of shitttttt. I remember when we first met, we were walking away from Morrisons and I went to push her in a bush, and she stopped walking just as I was about to push her in, and I fell in myself basically and she laughed and then when I went to roast her to cover my own ass, I stumbled on my words and she laughed even harder it literally made me feel like this 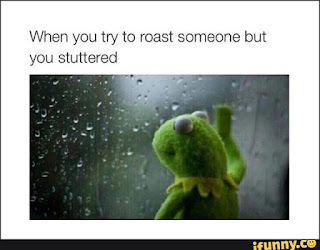 But seeing her laugh, and seeing that big cheeky smile of hers, made me happy. And you know there's that happiness on the outside like when someone tells you a joke and you're like ha ha very funny and then there's the happiness of your soul, like your whole body feels warm? Yeah I got that kinda happy when I heard her laugh and saw her smile and I still do to this day.

And then there's another story, of when I went to kiss her, while sitting in the park, and my big fat butt slipped down in between the slats on the bench and I practically headbutted her, like I'll be honest I thought I'd blown it with that, I thought she was gonna be like 'who the fuck you think you are headbutting me' and then she was gonna punch me in my pearly whites, but she didn't. And clearly I hadn't blown it cause we're still here nearly 13 months later.

Now as we get towards the end of the day, and she's watched me cry because my shoe's got dirty, and get all wet because my coat didn't have a hood and hers did and she was mean and wouldn't share it with me, we go back to hers to dry off before I get the bus back to mine and she gives me a can of coke full fat because I'm a lil piggy and we dry off, and I ask her what times the last bus back, because I've had such a good time with her I wanna spend the most I can and she says 'half 6' so we leave hers around 6 to get to the big bus stop for half 6, except we turn up at about 20 past 6 and see the last bus was half 5. So there I am all stuck in a different county, 2 hours away by bus, and all I have is £13 in my pocket. We do everything I can for me to try and find a way back to mine, cause I have college the next day at 9 oclock! Yes, I know, that time of the morning does exist, I didn't realise it either. It's about half 9 and we're walking back from Tesco's back towards hers and I'm going to stay there the night. We've been out for 3 hours and Livs phones broken so noone could message her and when we were on our way back, her mum finds us, and let's just say on the walk back, I felt like I did when I was middle school, and I told the teacher his head looked like a bowling ball. I feared for my life because her mum had an umbrella and I thought in the headlines there was gonna be

But very clearly I wasn't, because I'm here now, tryna write a real long ass blog post that will eventually turn around and be related to the main objective of the blog.

That was just at the start, when Liv was all quiet and shy, and when she'd come to mine, if we wanted something from the shop she wouldn't come with me, whereas now, she'll go by herself to the shop and get what she wants.

Just a few weeks ago we went to ComicCon in London, and there were literally thousands of people there at one time, and she got through each day we went. She got through the busyness of the underground and of London itself, and how packed it was in the Excel Centre, and not once did we leave early. She got through it all, and in the short space of a year she's managed to do that, when before she couldn't even get a bus. I've been with Liv when she's had her really low moments, when she can't even talk and she has to write what she wants to say to me on her phone and show it to me. I've also been with her when she's having a really good moment, like when she hit 2000 views, you'd have thought she won the lottery. That's how much you as her viewers mean to her, she basically threw a mini party because 2000 people at least could have been helped by her blog

One of the reasons I've decided to do this post is because I think I don't make it apparent enough how much she means to me and how proud of her I am. I think she doesn't get how much I appreciate her and the things she does for me. The amount of times she's put her own problems aside for mine is a huge amount and I could never say thankyou enough times to her for it. She does everything for me without question, and I don't show my gratitude enough. So when you eventually read this. Thankyou for everything you've ever done for me, and will do for me. I want to make her realise she is the strongest person I know. Anyone that goes through what she goes through on a daily basis is a complete soldier, the way they can keep a straight face and help everyone and anyone, when inside theyre hurting more than any problem would.

Another reason is basically so all you readers out there will see that it does get better. From someone who bailed on me 3 times, to someone who managed to go to ComicCon, someone who as she has said used to starve herself with the aim of ending it all, to a boss ass bitch who wants to help end the stigma of mental illness. She's gotten through it all, and she comes out stronger each time.

And to all you who don't suffer with any kind of mental illness, be careful what you say to people. You could be saying something to someone as 'banter' when actually you're tearing them up inside. You can't see mental illness, so to be safe rather than sorry, don't be a dick and bully someone for banter. Because together, we can all end the stigma of mental illness.

I appreciate all of you guys support towards the cause my girlfriend is doing, so I love you all for that. Keep doing what you're doing guys, you're rocking it!

Oh also, her blog is her blog, she keeps everything to do with that confidential, so don't be afraid to message her, noone else will ever see it.

Message her here at livnizzzle@gmail.com

Don't forget I want 4000 views by the time she reads this so comment, share, do whatever yopu have to do to spread the word!